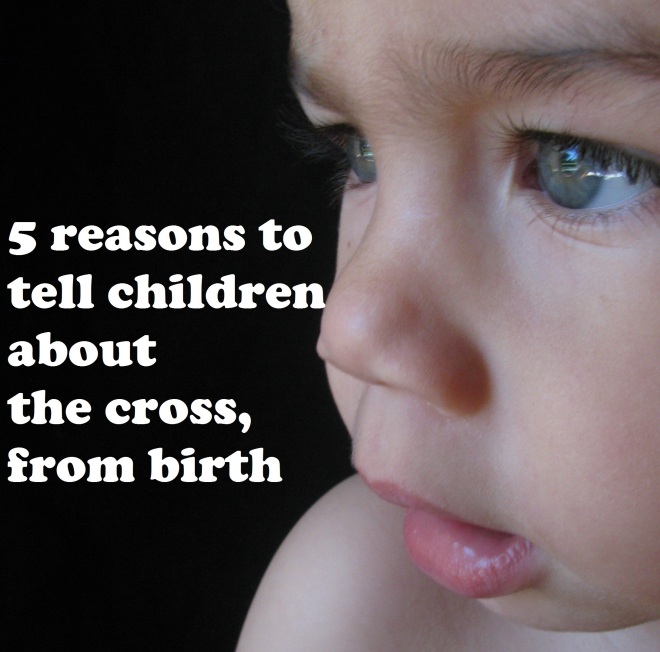 I won’t ever forget the first time I shared the Gospel with my oldest son. It was right after he spit up on my shoulder, and just a few minutes before I placed him gently in his crib. I don’t think he understood much at all that evening. He certainly didn’t ask any questions. In fact, I’m pretty sure he already was asleep.

He was an infant, about six months old.

I’ve repeated that routine every single night since then, and have now incorporated it into a bedtime song. For his twin brother and sister, I began telling them the Gospel message much earlier, right after birth.

Parents sometimes wonder when their children are “ready” to learn certain difficult concepts. The Gospel, though, shouldn’t be on that list.

We say “I love you” to our infant children when they’re only days old, long before they know even a single word. Why should we wait until they’re older to share with them a much greater message? That is, that the God of the universe loves them, too, and far more than we could ever love them.

For my three children, I told them from the start that: Jesus died on the cross for them, that they’re sinners, that He rose from the grave, that He’s the Son of God. Gradually, I wove in other concepts.

With that said, here are five reasons why it’s a good idea to tell the Gospel to your children, from birth:

1. It’s biblical. In Deuteronomy, God told the Israelites to teach their children the “statutes and ordinances,” which included all sorts of commands that referenced death and animal sacrifices. No age is given. Parents were to tell their children about the Passover — the time in history when the Lord “passed over” the Israelites and struck the Egyptians’ firstborn, all because God’s people had put blood from a lamb around their doors (Exodus 12). Scripture seems to assume that children — even ones not told the entire Gospel message since infancy — are able to “handle” the concept of death. Kids step on ants and see lifeless animals on the road. They watch flowers wilt and leaves fall. Death is all around them. Why should they think humanity is any different? Teaching children the story of the cross is quite simple, but only because death did not write the final chapter.

2. It prevents parents from wondering when the “right time” is to teach their children the full Gospel message. The time is now, no matter the age. Sadly, some children’s Bibles skirt this central fact by saying Jesus “went away” for a while, as if he got lost on a long hike. But Jesus’ death was necessary (Hebrews 9:22) for our salvation, and, besides that, it’s not the end of the story. This story has a far better ending that any book our children will ever read.

3. It allows parents to practice. Some parents struggle for the words to talk to their children about Christianity. Perhaps they didn’t grow up in a Christian home, or they’re new believers, or just aren’t comfortable discussing their faith. By sharing the Gospel message to a child early, the parent has the luxury of messing up until they get it right. The baby, after all, won’t even know.

4. Because we love our children. We sacrifice for our children every day. Why would we wait until later in life to tell them about the ultimate sacrifice, the greatest story ever told? The Gospel message is far too wonderful — and significant — to wait.

5. It allows children naturally to understand and comprehend the Gospel message. Not once has my oldest son asked me, “Wait, Jesus was killed?” It’s all he’s ever known.

5 thoughts on “5 reasons to tell children about the cross, from birth”