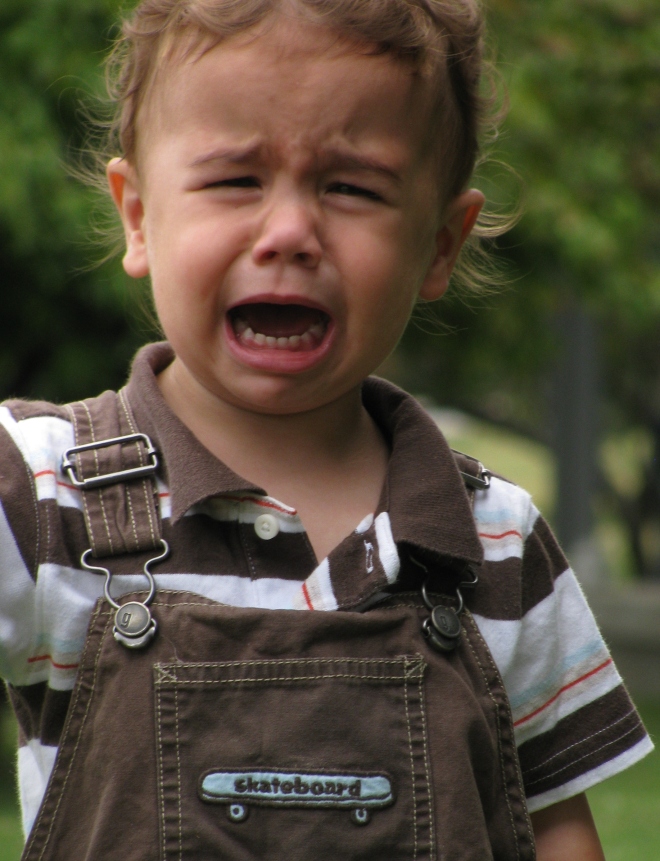 Think of the worst temper tantrum your child ever threw, or the worst moment of rebellion in your teen’s life, or – if you’re still struggling – that time in your high school days when you treated your parents like dirt.

I’m not talking about those times when you laughed at your 2-year-old as he or she ridiculously squirmed all over the floor because you wouldn’t budge on the no-you-can’t-eat-DVDs rule. And I’m not referring to Opie Taylor’s fake temper tantrum on “Andy Griffith,” when he tried to pitch a tantrum, but failed. I’m referencing situations in which you, as a parent, felt like a failure, and you grieved over your child’s actions. But you still loved your kid.

Not really fun to ponder, huh?

Several years ago, a pastor and I were talking about our children, and he disclosed how his son went through a rebellious stage as a youth. At home, the boy would say horrible things to his parents, and at church, he would walk in late and sit on the back row, talking to friends and passing notes. He and his son’s relationship, the pastor said, was a picture of the sinner’s relationship with God. The son was rebelling, just as we so often do. The father still loved his son, just as God still loves us.

That conversation stuck with me.

Scripture draws parallels between parents and their children, and God and His children. Psalm 103:13 says, “As a father shows compassion to his children, so the Lord shows compassion to those who fear him.” Similarly, in Matthew 7:9-11 Jesus asks, “Which one of you, if his son asks him for bread, will give him a stone” or “if he asks for a fish, will give him a serpent?” If earthly fathers will care for their children, Jesus said, “How much more will your Father who is in heaven give good things to those who ask him?” Then there’s the Parable of the Prodigal Son — another parallel between the family, and God and His children.

We are to care for our children just as God cares for His children (Christians). Our children learn obedience to God by first obeying us, their parents.

So, what does this all have to do with toddler temper tantrums and teenage rebellion? Simple. When my child or your child rebels, we’re getting an oh-so-tiny glimpse of what our sin really looks like to a Holy God. It’s as if God, watching our children misbehave, is saying, “Do you understand now?” Our children don’t have to be prodigals for us to get the point. Any rebellion is a parallel to our own sin.

Here, then, are three spiritual lessons I’ve learned by being a father:

1. Sin is ugly. Think back to that moment when your child rebelled – that lowest moment for you as a parent. It was an ugly moment, and one you hoped you’d never again experience. It also was a brief snapshot of your own sin – warts and all. There have been times when, shortly after I sinned against God, my oldest son would do something that grieved me. I would well up in tears, knowing I was witnessing – directly before me – a picture of my own sin, which is far uglier than I wanted to admit.

2. God loves us more than we can imagine. Thankfully, most of us don’t experience our child’s worst moments of rebellion day after day, week after week. But God experiences our sin multiple times every day, and He still loves us. And I’m not even talking about the “big” sins. I’m simply referencing the times we gossip, or the times we choose entertainment over the Word, or the times we allow a sinful thought to percolate in our mind. We may not think those sins are a big deal, but God does. And He still loves us.

3. I don’t hate my sin enough. Are we grieved over our sin against God as much as we are grieved over our children’s sin against us? Too often, my answer to that is “no.” I’ll spend all day mulling over how I can help my children become more obedient, but do I ever spend the same amount of time mulling over my own sin, examining my own life? Do you?

I don’t enjoy watching my children rebel. It grieves me. But I am thankful it serves as a reminder of my own sin – and of my dependence upon God.