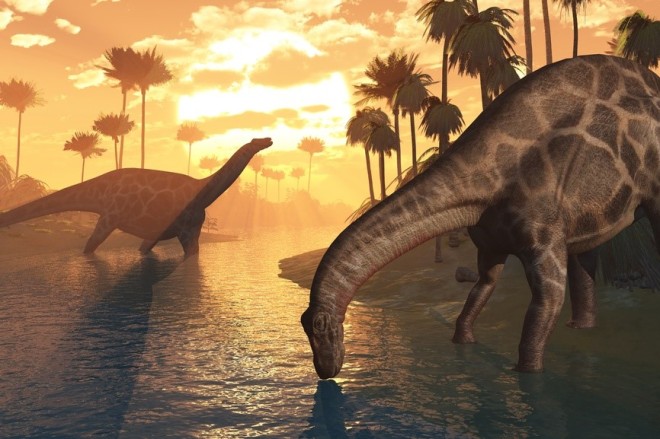 Sometimes I wonder if we Christians have missed the mark when it comes to discussing dinosaurs. I think about this often because I have a 6-year-old who, honestly, wishes he were a triceratops.

Too often we seem to get lost in arguments over the when and how—for instance, “Did they live thousands or millions of years ago?”—and we fail to ask a more basic question: Why did God create dinosaurs? For instance, did He make these majestic creatures simply so we could split up into two camps (young-earthers and old-earthers), or did He make them for the same reason He made the rest of creation: for His glory? And if he made them for His glory—which He did—then why did He have them all die off before you or I would even see them?

Here’s what I think: It’s because we will see them again someday, after creation is restored. There is scriptural evidence for this, and that should excite all Christians—your kids, my kids and the “kid” in all of us—and make us even more amazed at God’s plan for the future.

To build the case for why dinosaurs just may be in heaven, we need to start with a more basic question: Will animals be in heaven? I don’t know whether your specific pet or mine will be in heaven, but the Bible seems clear that animals—generally speaking—will be there. Consider …

First, after God created animals (days 5 and 6 in Genesis 1), He called them “good.” He said the same thing about light and land and seas and plants—all were “good,” and all are things we expect to see in the future in what Scripture calls the new heavens and new earth.

Second, animals were in the pre-Fall Garden of Eden—which is a picture of what creation not only should look like but will again someday. Before sin entered the world, Adam named the animals (Genesis 2:20). He perhaps petted the goats, ran with the gazelles, and even climbed high onto a giraffe’s neck.

Third, the prophet Isaiah used animals to describe God’s future Kingdom: “The wolf shall dwell with the lamb, and the leopard shall lie down with the young goat, and the calf and the lion and the fattened calf together ….” (Isaiah 11:6). Not only will there be animals, but they will be tame.

So animals will be in heaven, but what about dinosaurs? To answer that, we have to use a bit of Scripture, a touch of philosophy, and even some common sense.

Romans 8:19 tells us that “creation waits with eager longing” for the return of Christ when “creation itself will be set free.” In other words, creation will be restored to God’s original intent.

If we believe that animals will be in heaven, then why wouldn’t we believe that every animal that God ever made will be there, too … even the extinct ones? After all, if the new heavens and the new earth are all about a restored creation, then wouldn’t filling that restored creation with every animal God ever made be part of that plan? We’re not just talking about dinosaurs here, but also the dodo bird, the saber-toothed tiger, even the woolly mammoth.

To leave out extinct creatures would seem to give victory to death and Satan—perhaps tantamount to saying there are some parts of His creation that God can’t restore.

Of course, this is all up to God. But it’s hard to imagine animals not being in heaven. They are amazing and spectacular creations. We take vacations across the continent and world to see them in the wild, and each weekend, flock to zoos to catch a glimpse. And dinosaurs? They’re arguably the most incredible land animals God ever made. If animals are in heaven, surely dinosaurs will be there, too.

So when my son asks “will dinosaurs be in heaven?” I answer with a (somewhat) confident “yes.” I’m looking forward to seeing a T. rex and a triceratops there, but —I tell my son—I’m looking more forward to seeing Jesus Himself—the Creator of those huge animals. Still, it surely will be fun for my son to play “triceratops” … right alongside a real triceratops.

Michael Foust is an editor and writer who blogs about parenting and fatherhood. He loves his family and also really likes stove top popcorn. Interested in re-posting this in your publication or on your blog for free? Send me a message in the comments section below (the message won’t go public). Also, check out my video section.

6 thoughts on “‘Dad, will dinosaurs be in heaven?’ (the answer may surprise you)”