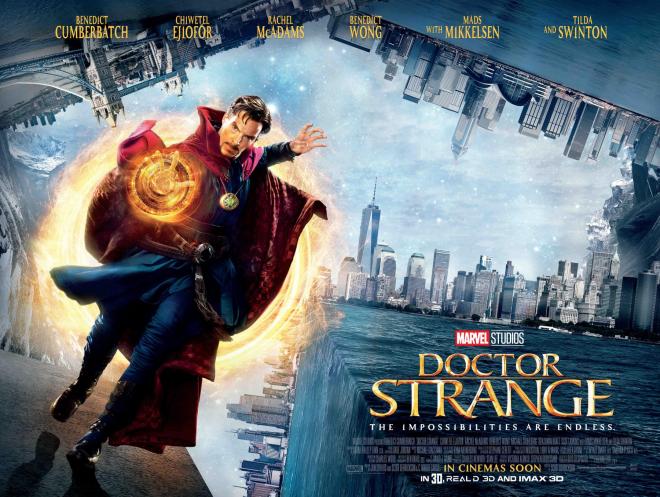 Perhaps you thought that the Avengers – that’s Iron Man, Captain America and their friends – were more than enough to protect Planet Earth. If so, you would be wrong.

That’s because – as we learn in the new movie Doctor Strange (PG-13) – the Avengers only protect Earth from physical threats. Superhero sorcerers protect us from mystical threats that originate from other dimensions and universes. Yes, there are multiple realities and multiple universes in the world of Marvel’s latest movie, which easily lives up to its “strange” title.

The “Dr. Strange” is Stephen Strange, a neurosurgeon who is known as much for his ego as for his world-renowned skill. His life takes a turn during a horrific car crash in which he loses full movement of his hands, and, desperate to regain his career, he travels to Nepal to find the person he was told healed a paraplegic. Strange believes he is looking for a traditional doctor, but he instead discovers a group of sorcerers who are led by a thin, bald woman known as the Ancient One. It is there that he himself becomes a sorcerer, learning to teleport from one location to another and even travel from one universe to the next time. He also figures out how to reverse time.

Strange becomes Earth’s protector against the bad sorcerer Kaecilius, who wants to destroy our planet and discover the power to have eternal life.

The Marvel superhero films have been wildly popular among children, who likely will be asking to go to this one, too. So, should mom and dad take them? Let’s find out.

Yes, the core of Doctor Strange is Eastern Mysticism combined with magic and science fiction – not the stuff of a Christian worldview – but it also makes a few points that parents may want to piggyback. When Strange tells the Ancient One that “there is no such thing as spirit” and “we are made of matter and nothing more,” she retorts that there is a spiritual dimension, and then she proves it to him. Sure, it’s merely a science fiction critique of secular humanism, but I’ll take it.

The film’s villains come to Earth wanting to learn how “we can all live forever,” and while they never find Billy Graham or a Bible, their longing for something that actually does exist in the real world could open up conversations about eternal matters. (The Ancient One, in case you’re wondering, dies.)

It also is nice to see Dr. Strange’s self-centeredness challenged – and him overcome it.

In spite of its emphasis on spirits and the non-material, there is no God in Doctor Strange – only multiple universes with dueling sorcerers. That’s not unlike other superhero films, but its inclusion of Eastern mysticism may make some families uneasy. The sorcerers have the power to separate their spirit from their body and float through the air.

It is a very violent film, with multiple fight scenes and a few bloody moments. The car crash is somewhat gruesome, as we see Dr. Strange’s bloodied face. During a fight, he gets stabbed in the chest. The film has a few surgery scenes, as well.

It is light on language with about 10 coarse words (details below) and has no sexuality. (The closest we get to sexuality is the phrase “sleep together” during a conversation.)

I have seen most of the Marvel films and enjoyed the majority of them more than I did Doctor Strange. At times, it was just downright weird, leaving me wondering: Maybe this is what it was like to be on LSD at Woodstock. It’s not a bad movie, but it’s certainly no Iron Man.

My oldest children are eight and four, and I would not take them to see Doctor Strange. It is too violent and (at times) too scary. For teens, this one is far cleaner than most PG-13 movies out there.

What was your reaction to Dr. Strange’s statement that “life without my work” is not worth living? How would you respond to someone who said “we are made of matter and nothing more”? Did any biblical stories come to mind when the film’s villains said they were chasing after eternal life and wanted to “live forever”? Who is protecting our world from spiritual dangers? What was your reaction to the Ancient One declaring that “death is what gives live meaning”?

Doctor Strange is rated PG-13 for sci-fi violence and action throughout, and an intense crash sequence.

Michael Foust has covered the intersection of entertainment and faith for more than a decade and is the father of four small children. Follow him on Twitter: @MichaelFoust. Contact him: michaelfoust (at) gmail.com