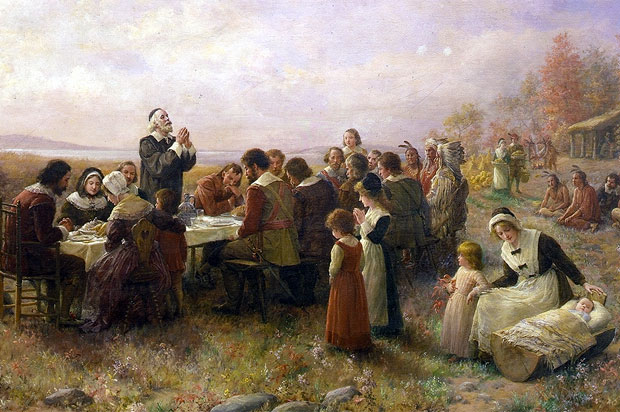 Several years ago I was in an airport with an hour or so to waste, and decided to go hunting for a shop that sold one of my favorite sweet treats – frozen yogurt.

But when I found a yogurt shop, my heart sank.

Huh? No yogurt? Why? You’re a yogurt shop!

Alas, I didn’t get any yogurt that day. But I did get a memorable story that applies directly to our modern day celebration of Thanksgiving. Let me explain.

Thanksgiving became a national holiday in 1863, when President Lincoln proclaimed a day of “Thanksgiving and Praise to our beneficent Father who dwelleth in the Heavens.” Lincoln had it right, but modern-day America has drifted far, far from that first proclamation.

America still celebrates Thanksgiving, and it still gives thanks. But for the most part, it’s forgotten the “Whom” it’s thanking.

We’re the yogurt shop with no yogurt, trying to celebrate Thanksgiving without give “thanks” to God. (And we’re not about to reference those Christian Pilgrims.)

This perhaps is best seen when searching for children’s books that recount the story of the Pilgrims – a group of men, women and children who crossed the Atlantic to find religious freedom. Sadly, few children’s books acknowledge either the Pilgrims’ faith or their purpose in crossing the sea. My kids have one book on their bookshelf that says the Pilgrims wanted to hold a celebration feast because they “felt so happy about their good fortune.” The Pilgrims, essentially feeling lucky? I doubt that’s how the Pilgrims – who believed God guided their every step – truly felt.

I’m always looking for children’s products that teach the true story of Thanksgiving, but the list is fairly short. I spent a few minutes at a major chain bookstore the other day, looking for books (aimed at young children ages 4-8) that give more than a one-sentence reference to the Christian part of the story. In the end, I found two.

Following is the description of those two books, along with a DVD my family enjoys.

(Do you know of others? Leave a comment and let me know.) 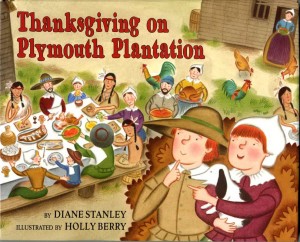 “Thanksgiving On Plymouth Plantation” (Diane Stanley, Holly Berry, Scholastic) –  On one page a child tells another why the Pilgrims crossed the Atlantic: “[It was] so we could practice our religion freely. Back in England it was against the law to have our own separate church.” In fact, several pages in this impressively illustrated book give fascinating details about the Pilgrim’s faith (they didn’t celebrate Christmas, for instance, and their worship services didn’t include anything that wasn’t in the Bible). It also dispels some myths (such as: The Pilgrims didn’t always wear black). But there is one page that will bother some families: A Pilgrim woman recounts how they drank beer in England because it was healthier than the polluted water. A child even ponders why “Pilgrim kids drank beer for breakfast.” Other than that, this one is highly recommended. 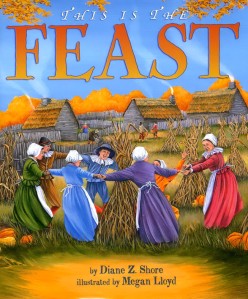 “This Is The Feast” (Diane Z. Shore, Megan Lloyd, Harper Collins) — This fun, wonderfully illustrated book tells the story of the Pilgrims through a rhyme, and makes it clear that their faith was at the forefront. Prayer is referenced at least six times, and on five occasions the phrase “thanks be to God” is used. The Pilgrims thank God for the lives that were spared during a harsh winter, as well as for the Indians they encountered and for the harvest God provided. The book is intended for children ages 4-8, but I read it to my 2.5-year-old twins, and it (mostly) kept their attention. Highly recommended. 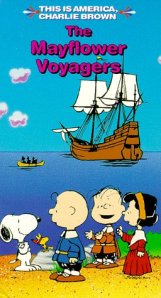 “Charlie Brown: The Mayflower Voyagers” (DVD) – The faith of Peanuts creator Charles Schulz is often debated, but when it came to depicting Christianity in cartoons, he got it right – first in a “Charlie Brown Christmas,” and also in this wonderful Thanksgiving special. But don’t confuse this cartoon with the one in which Snoopy cooks his friends popcorn and toast. That one is funny, but it’s not The Mayflower Voyagers. In the latter, Charlie Brown, Lucy and the entire gang board the Mayflower as Pilgrims and cross the Atlantic Ocean. We learn early on why the Pilgrims are crossing the sea (to seek “religious freedom in the New World”), and when things get rough, Charlie Brown tells Linus to have faith. During the end-of-the-show feast, a prayer is said (“we thank the Lord for our bountiful harvest”). This one isn’t on TV every year, but it’s cheap as a used DVD, and often on YouTube, too. Highly recommended, and I enjoy watching it every year.

Michael Foust is an editor and writer who blogs about parenting and fatherhood. He loves his family and also really likes stove top popcorn. Interested in re-posting this in your publication or on your blog for free? Send me a message in the comments section below (the message won’t go public). Also, check out my video section.