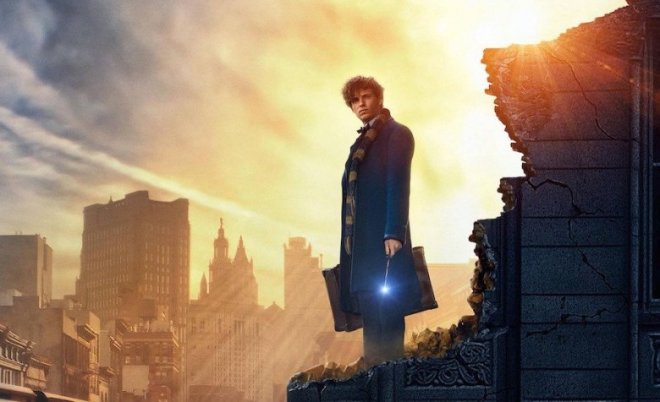 Newt Scamander, a quirky-but-funny “magizoologist,” owns a suitcase like no other – a suitcase where dozens of other-worldly animal-like creatures reside.

Some are larger than a house, while others can fit in his pocket. One even is invisible. All of them, though, are mischievous, and that spells trouble during his trip to New York City when they begin escaping.

Scamander and his suitcase are at the center of the new movie Fantastic Beasts and Where to Find Them (PG-13), which was written and produced by J.K. Rowling and is being billed as a “prequel” to the Harry Potter series, taking place in 1926 NYC.

Scamander — himself a wizard — steps off his ship into an American society that is divided between two classes of people: those who have magical powers, and those who don’t (the “non-maj”). The magical world is governed by a Magical Congress of the United States of America, and there even is a Magical Congress president. Although both classes of people seem nice enough, current law forbids them from interacting — and wizards definitely aren’t allowed to practice their magic in front of non-maj people. But don’t fear: If any plain person does see a spell, the magical world has the power to erase those memories.

Despite the powers of the wizarding world, there is a growing anti-magical sentiment among the non-maj people. That’s because weird stuff is happening. Streets are exploding and buildings collapsing. One group (the “Second Salemers”) are calling for a series of anti-witch trials, and they’re even placing posters around the city proclaiming: “No Witchcraft In America. We Need A Second Salem.”

Are Scamander’s beasts the cause of this destruction? Or is it being cause by something evil?

The Harry Potter film series was incredibly popular among children and teens, although its focus on wizardry divided Christians. I will leave that debate to others, but for now, let’s look at the content of what is sure to be a major box office hit.

From an entertainment perspective, Fantastic Beasts provides us a lot to like. It’s truly funny, led by the interaction between Scamander (Eddie Redmayne) and his non-maj friend, Jacob (Dan Fogler). The musical score is delightful and the visuals are absolutely stunning.

It definitely needed a PG-13 rating, but – content-wise – it’s on the low end of the spectrum. It’s far less scary than Miss Peregrine’s Home for Peculiar Children and has far fewer content problems than the newest Ghostbusters movie.

Scamander’s beasts look sort of like prehistoric animals, and only the most sensitive of children would be bothered.

Scamander exhibits several positive qualities. He is trustworthy and honest, as he prevents his animals from stealing money from a bank and then jewelry from a store. He is caring, as he tries to stop a wizard from turning to “bad magic.” He is generous, as we see in a scene at the movie’s end. He also loves his beasts, telling someone that his goal is to keep wizards from killing their kind.

While Fantastic Beasts isn’t the scariest PG-13 film of the year, it still has its frightening moments. The opening scene is somewhat scary, but the worst parts take place in the film’s final hour, when we learn that a dark force called an “obscurial” is what has torn up the city. In fact, it has possessed a child – which only adds to the creepy factor during one major scene. At least three times we see dead bodies, up close, that have been killed by an obscurial.

There is minimal language (three exclamations of he–) and minimal sexuality (a woman is seen in a slip and quickly dresses; she can read minds and implies that she knows that Jacob was thinking dirty thoughts; later they kiss on the street).

Violence involves a few wizard battles using their magic; there is no punching or traditional fighting.

Unlike the Harry Potter films, Fantastic Beasts contains no magic schools, although they are briefly referenced. (Students in the Harry Potter movies read a book called Fantastic Beasts.) Interestingly, the wizards’ powers are limited. (In other words, their powers are not fully God-like, although the wizards certainly are the rulers of this world).

The Verdict: OK For Kids?

I did not take my eight-year-old son to Fantastic Beasts, and I’m glad I didn’t. It is, at best, iffy for his age, and there are some scary scenes that troubled even me. (It definitely is not appropriate for young children ages four and five.) On the plus side, it has very little language, sexual content or violence. Parents who are uncomfortable with movies about magic, though, will definitely want to avoid this one.

What good qualities does Scamander exhibit? If someone could read your mind, would that change the way you think about them? What impact, if any, did bullying play in Credence’s path? Are there differences between the magic found in Fantastic Beasts and the “magic” found in other films, such as the Star Wars series, Frozen, the Avengers or Snow White? What does the Bible say about the spiritual realm, angels and demons?

Fantastic Beasts is rated PG-13 for some fantasy action violence.

Michael Foust has covered the film and TV industry for more than a decade and is the father of four small children. Follow him on Twitter: @MichaelFoust. Contact him: michaelfoust (at) gmail.com