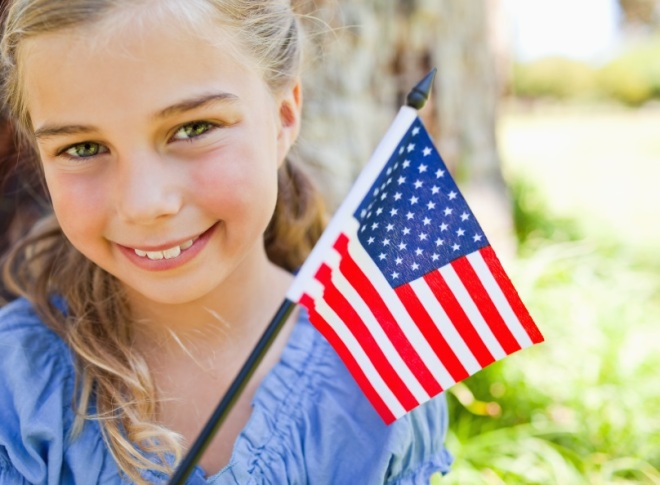 Mark Twain may have said it best: “Patriotism is supporting your country all the time, and your government when it deserves it.”

That’s a good approach just about any day, but especially during polarized times such as these. After all, very few of us are happy with the way things are going in Washington, D.C., no matter your party. And even if you are among the few who are pleased with Congress and the president, just give it a few years. Things will change. That’s the nature of politics; it’s cyclical.

There’s a lot I’d change about D.C. and the country, but I still love America and the ideals for which it stands. That’s the way my wife and I are raising our kids. We don’t worship America but we do believe the U.S. is immensely blessed — and we want our kids to appreciate that.

Here are seven ways we’ve taught our kids about the United States and its history that might benefit your family, too:

1. Tell them about America’s triumphs. Teach them about the freedoms the Founders established that were uniquely American at the time – freedom of the press and religion. Talk about the great inventors: Samuel Morse (telegraph), Alexander Graham Bell (telephone), Thomas Edison (phonograph, motion picture camera, electric light bulb), the Wright Brothers (airplane). Discuss the role America played in World War I and II, and the way it won the space race and put the first man on the moon, and even won that 1980 Miracle on Ice.

2. Tell them about America’s flaws. Otherwise, their perspective of the United States will be skewed, even unbiblical. No country is perfect. We’re still a nation, for instance, that enslaved an entire race and that waited nearly 150 years to give women the right to vote. Then tell them how the Founders, through the Constitution, laid the groundwork to right the nation’s wrongs, and how no country – no matter how dominant – can thrive continuously without God’s blessings (Daniel 2:21, Psalm 22:28).

3. Pray with them for America’s leaders. That city board member or state leader or U.S. representative or president you were badmouthing last week, in front of your son? Pray for that person, with your son. As Christians, we’re commanded to do that (1 Timothy 2:1-4), even if it’s difficult. If we don’t, we’re not only disobeying God, we’re also discounting the power of prayer. And while you’re at it, learn to turn off MSNBC, Fox and CNN.

4. Watch a 40-episode educational show with them. Sound crazy? It’s not. It’s called “Liberty’s Kids,” and if you’ve never seen it, you’re missing out. My oldest sons loves it. It’s a cartoon miniseries that tells the story of the Revolutionary War through the eyes of kids living in the late 1700s. Each episode is about 25 minutes long, and I learn something every time I watch it. It was first broadcast on PBS but is available on DVD for around $10 and free on YouTube. It doesn’t whitewash American history, nor does it ignore the role that Christianity played in the nation’s founding. You’ll be whistling a patriotic tune at the end of each show.

5. Read a patriotic kid’s book. When my son was 4 and I wanted to teach him about the Fourth of July, I bought a board book, “The Story Of America’s Birthday.” Then I got a small paperback, “In 1776.” He loved both and wanted me to tell him more about the “bossy king.” Another good one is “Good Night America.” This year we bought a new one, “The Story Of The One And Only Declaration Of Independence,” which is great for older kids and recounts the fascinating journey of America’s founding document through its 200-plus-year history.

6. Visit a local historical site, or even a veteran’s cemetery. I’m often dragging my family to the nearest historical sign, museum and building, and believe me: There are fascinating historical sites no matter where you live. But don’t make it boring; build it up beforehand (“we’re going to President Thomas Jefferson’s home!”), don’t stay too long, and do something kid-friendly (we once bought special souvenir suckers). Don’t know where to start? The National Park Service has a great resource on its website, with listings by state. There are many reference books, but the best one I’ve found is the National Geographic Guide To America’s Historic Places. It’s out of print, but you can get a used copy for less than $5.

And last of all …

7. Buy some fireworks – or attend a fireworks show. Buying them is as much fun as lighting them. I enjoy bang snaps for young kids, and bottle rockets for older ones. President John Adams would approve. He told his wife that future generations of Americans would celebrate independence with “pomp and parade, with shows, games, sports, guns, bells, bonfires and illuminations.” He also said we’d commemorate it with “solemn acts of devotion to God Almighty.” That’s an even better idea, don’t you think?