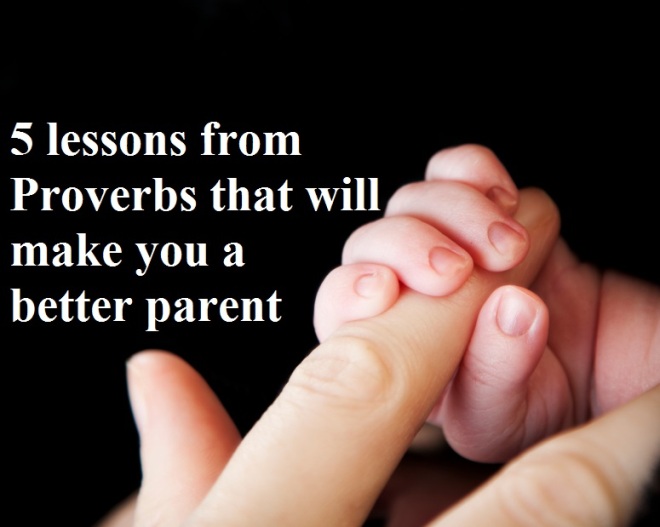 For most of my life I’ve thought of the book of Proverbs as a collection of “moral nuggets” – a buffet of sorts that has a verse for just about any situation in life.

Proverbs certainly has plenty of wisdom in it, but lately I’ve been looking at its overarching themes. That is, the “lesson behind the lessons.”

Moms and dads can learn a lot from Proverbs. Here are five themes that stick out to me:

1. Be a parent and not a “buddy” or “friend.” That is, a parent has God-given authority over their kids, a role that comes with enormous but wonderful responsibilities. The writer of Proverbs, Solomon, makes this obvious from the start: “Listen, my son, to your father’s instruction, and do not forsake your mother’s teaching.” Think about your best friends in high school. Did you ever give them “instruction” or “teach” them anything? No, you just had fun. Of course, I have lots of fun with my children. We laugh all the time. But even though I playfully call my two sons my “buddy,” my role is to be their father.

2. Prioritize morals and values over schoolwork. I’m sure Solomon’s children learned their Hebrew ABCs and 123s, but he wrote an entire book teaching them something far more important – morals and values. I’m as guilty as any parent of prioritizing head knowledge over heart issues. I love teaching my oldest son American history and his two younger siblings the alphabet. But in the meantime, does he share with his friends? Pray for his friends? Love all his friends – even the ones who may be mean to him? We parents stress out too much over schoolwork, when bigger issues remain.

3. Put God at the center. Solomon’s teachings on morals and values don’t take place in a vacuum. They have a foundation. For instance: “The Lord abhors dishonest scales, but accurate weights are his delight” (Proverbs 11:1). And: “The Lord detests the thoughts of the wicked, but those of the pure are pleasing to Him” (Proverbs 15:26). For Solomon, stealing – and every other sin — was wrong because God said it was wrong, and because honesty and truthfulness is part of God’s character.

4. Don’t avoid the difficult subjects. You don’t have to go very far into Proverbs before Solomon dives into the subject of sex. “The lips of an adulteress drip honey, and her speech is smoother than oil. But in the end she is bitter as gall, sharp as a double-edged sword. Her feet go down to death; her steps lead straight to the grave” (Proverbs 5:3-5). Think about that the next time you see a trashy Cosmopolitan magazine cover in the checkout line. Solomon spends three lengthy chapters talking about sex. Then he deals with death. The list goes on and on. No, we should not introduce subjects to our children before they can understand. But we should not run away from them, either.

5. Make sure your children avoid your mistakes. Don’t believe for a second that you have forfeited your moral authority on a particular subject because of your past. Solomon certainly hadn’t. The man who had multiple wives and concubines was the same one who wrote some of Scripture’s greatest warnings against adultery. He knew its dangers and its consequences, and he didn’t want his son to follow his path. His tone is unavoidable: Don’t do what I did, son. Some of the greatest conversations with my oldest son have taken place after I told him I, too, had sinned. I remember his shock once when I told him I had lied. “You’ve lied?” he said in shock. My son learned a lot – and yours just might, too.