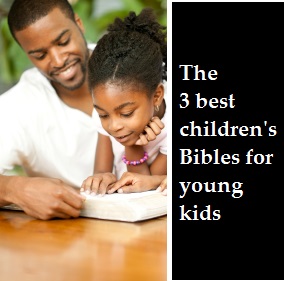 Several years ago, when I tried to read my oldest son a story from his first children’s Bible, he tried to eat the cover. And the pages. It was not surprising, since he was still drinking a bottle and not yet age 1.

He was still learning the concept of “books.”

But perhaps he was on to something and just took it too far. After all, Scripture does say that we are not to “live by bread alone, but by every word that comes from the mouth of God” (Matthew 4:4).

My three favorite children’s Bibles for young kids all have something unique about them. (Learn more below.) They’re also biblically rich enough that parents, too, can learn something while reading along. Also, they’re all hardbacks. If you want a board book, I have recommended two of those, although board books are unique to each individual child. By that, I mean that if your child is 1 or 2, you’re really after one thing: Will the pictures keep the child’s interest? And is there too much text? I have a theological problem with every children’s Bible board book I’ve read. The problem, of course, is easily solved: The parent simply ad-libs at the problem spots, because the child can’t read.

Disagree with this list, or would add to it? Let me know in the comments.

3. The Children’s Bible Story Book (1992, Thomas Nelson). A family member bought a used copy of this one for my family, and we’ve really enjoyed it. The age range is listed as 3-11, but I’d guess that there is too much text on each page for most 3- and 4- year-olds. More than 250 stories – evenly divided between the Old and New Testaments – are included, and the artwork is first-rate. I’ve enjoyed reading it with my oldest son because it includes many stories he previously had not learned. It’s also good for adults: I had forgotten some of the details of many of the stories. We were learning together. Because it includes so many stories, it may include concepts you’d rather avoid for now with your kids, such as the patriarchal practice of polygamy. But you can just ignore those chapters – or have a conversation with your kids about how the patriarchs were sinners, too.

Pros: Good text and artwork. More than 250 stories, including Christ’s death and resurrection. Includes stories that other books don’t. 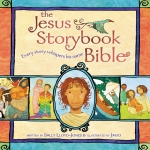 2. The Jesus Storybook Bible (2007, Zondervan). The publisher lists this popular children’s Bible as for ages 4-8, although my oldest son didn’t begin enjoying it until age 5. There simply was too much text on each page for him until then. But this Bible – along with The Big Picture Story Bible – stands out because it shows how the Old Testament looks forward to the coming of Christ. I love that about it. For instance, in the story of David, it notes that “many years later, God would send his people another young Hero to fight for them. And to save them.” It adds that this Hero “would fight the greatest battle the world has ever known.” The book includes 21 stories from the Old Testament and 23 from the New Testament. The artwork is unique, to say the least. The only downside for me is that the (stellar) creative writing used by author Sally Lloyd-Jones includes words we tell our children to avoid, such as “stupid” and “luckily.” But overall, it’s one of the two best children’s Bibles out there for ages 5 and up that I have seen. Highly recommended.

Cons: None with the book. One version includes an audio CD, which my oldest son didn’t care for. Perhaps the reading of the text was too theatrically dramatic. But your kid may love it.

1. The Big Picture Story Bible (2004, Crossway). This is my favorite children’s Bible for young ones, for a number of reasons: 1.) There are not too many words on each page, allowing parents to keep the attention of children ages 3-4; 2.) Each chapter ends with a sort of “cliffhanger” previewing the next chapter and showing children the continuity of Scripture; 3.) It makes it clear that Jesus is seen throughout the Bible, beginning in Genesis; 4.) The audio CD is stellar, allowing children who cannot yet read to follow along on their own. The artwork is great, too. It includes 11 chapters from the Old Testament and 15 from the New Testament. If your child is ages 3-5, consider this Bible first. If they’re older, perhaps The Jesus Storybook Bible would be best. Ideally, though, purchase both.

Pros: Good next and artwork. Shows continuity of Scripture and shows Christ in the Old Testament. One version includes a stellar CD.

AND 2 GOOD BOARD BOOKS

— My Favorite Bible Storybook For Toddlers (2005 Spirit Press,). The publisher lists the age range for this fun-flap board book as 2 and up, but I began reading it to my oldest son when he was still drinking out of a bottle around age 1. And there’s proof of that – many of the flaps are torn, the result of us often giving it to him to play with on his own, as a toy. He loved it. The text is simple and the pictures engaging, with a fun flap on each page. Each story takes up two pages, with the text on the left page and the picture on the right. Individual stories conclude with a series of questions for the child. Some are relevant, some less so. It acknowledge Jesus’ death in two separate stories, saying in the final story that “Jesus’ friends were sad when He died.” (a picture of an empty tomb, not the cross, accompanies the text). Overall, it’s worth the purchase for little ones.

Cons: The theologically astute might be bothered by some of the application. Also, it doesn’t introduce concept of sin.

— The Baby Bible: Stories about Jesus (2008, David C. Cook). The publisher lists the age range for this board book as 2-5. That’s pretty accurate, although when my oldest child was approaching 4, we had moved on to non-board books that had more complex text. This one does not have flaps, which is good and bad. The good: Your young one can’t tear them out. The bad: Your kid might like flaps. But the text and pictures are good, and this one does have something that My Favorite Bible Storybook For Toddlers doesn’t: It lists the Bible passage with each story, so you can introduce your little ones to the concept of Bible books, chapters and verses. It also has suggestions for engaging your child. For instance, for the story about the wise men, children are told to “pretend to ride a camel.” I can imagine this being useful for a family worship time. This board book also introduces the concept of Jesus’ death, again accompanied — like the other toddler book mentioned above – with a picture of an empty tomb.

Pros: Board book (good for young ones). References Christ’s death and resurrection.

David C. Cook also publishes a similar board book by the same author called “The Baby Bible Storybook,” with stories from both the Old and New Testament. Although good, this board book avoids Jesus’ death by saying some people “took Him away” and his friends “thought they would never see Him again.”

(This list included only children’s Bibles, and not books by publishers about individual Bible stories.)